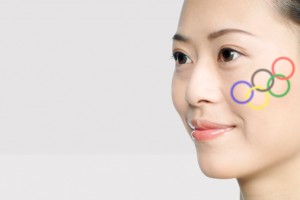 During the first Olympics, nations stopped warring; tribes stopped fighting and armies stopped threatening so that athletes could travel and compete in peace. Is it so ridiculous to consider that we perhaps stop…working? Incorporating the Olympics into your workplace doesn’t have to be a distraction. It can be a terrific source of motivation, engagement, and fun!

At the same time, you don’t want people calling in sick to watch their favorite events or huddling in the break room with their iPad for two hours to watch curling. At Maritz, we had the games projected on a large screen in the cafeteria all the time. You could go down at any time and check it out.

Now, you couldn’t really camp out there – as the old saying goes, people who work in glass offices can’t sit around all day watching TV. You had to get your work done and keep your clients satisfied, but if a favorite event was on, why not watch a little? You’re still productive, but you’re also more engaged. In fact, ten, twenty minutes of watching your favorite athlete/team can be just the break you need before you get back into your own game.

Canadian Tire thinks so, too. The Olympic sponsor set up viewing lounges, complete with beanbag chairs, refreshments, and team gear. Last year, the national chain asked its people to create videos in which they channeled their inner sports reporters. Four winners were chosen – and flown to Sochi. They’re actually covering the games for their fellow employees and hanging out at Canada House with the athletes.

That’s an extreme example of national pride and Olympic enthusiasm! You don’t need to send people to Sochi, buy expensive team gear, sponsor the games monetarily, or put together pricy celebrations. The refreshments, though, are still a good idea. Simply having a TV for employees, and letting them know it’s OK to go and watch their hometown hero compete or their favorite team go for the gold, is enough.

The celebrations happen organically. This is what’s so great about the Olympics: they bring people together. Gathered around the television watching Dara Howell win the gold in freestyle skiing or the women’s hockey team beat the US – those are the types of moments employees remember.

Canadian Tire’s VP of corporate affairs, Rob Nicol, says, “An engaged, excited, motivated work force is good for any company…. The Olympics bring together the entire country, and they bring together our employees.” That’s what it’s all about.

The Winter Olympics only come once, for two short weeks, every four years. Taking time to stop for a few minutes isn’t going to ruin productivity or profitability. It may even do the opposite, giving your winter-weary employees renewed energy, morale, and hope.